Lessons from the Japan Earthquake (by Masatoshi Watanabe)

The Great East Japan Earthquake that struck on March 11, 2011 directly impacted people living in Miyagi, Fukushima and Iwate prefectures, but it affected people all over Japan. Over a period of about a year, I did a series of activities with my junior high school students related to the earthquake.

I gave my 9th graders a worksheet with three questions:

Q1：Write the key phrase which was repeated frequently.

Q2：Write the Chinese characters which come to your mind as.

Q3: Write your own message in English to cheer up the victims of big earthquake.

Next students watch a video clip on You Tube and answered the questions.

This video contains messages of encouragement from all over the world for victims of the big earthquake in Japan, sung to the famous tune “We are the world.”

In question 1, most of the students were able to answer “pray for Japan” as I had expected, but some of the students answered “we are the world”, an answer I had not expected. In the answers to question 2, students wrote many Chinese characters such as 祈(prayer)、願(wish)、希(hope)、望(hope)、絆(bond)、援(support)、輪(circle)、協(cooperation)、命(life)、助(help)、生(life)、愛(love)、信(belief)、夢(dream)、復(revival)、日本(Japan)、世界(world). I believe that students were able to appreciate the most important things in their lives, and seemed to have a general understanding of those values, even if they were vague in their expression of them. In question 3, students came up with many good English sentences, for example:

“We are not alone. I also pray for you with people all over the world. Never give up. Bad times will not last!!”  “Cheer up! People in Japan, people around the world will support you. Of course, I will do my best to support you. If you don’t give up, certainly a good future will come! Go for it!”  “Do you remember ‘Hanshin Awaji earthquake?’ The place becomes good. You can become good, too. I hope you live a long life.”  “I’m very sad to see the victims on TV. I can do nothing now, but I’d like to help lots of people in the near future, so I must study harder about the environment, for example, about earthquakes, tsunamis and typhoons. We must do something. People help Japanese from all over the world, so never give up, always do your best!!”  “Japanese people are tough!! You are grieving now, but these laments won’t continue forever. Don’t look at past events. Look to the future. We can help you.”

I was very impressed with the sentences my students wrote. I found out that they could write wonderful English if they were really moved.

To be honest, when I assigned my students the task of writing encouraging letters to unknown victims, I thought that if the students could have some kind of contact with the people who received the letters the activity would be more effective. So my professor Marc Helgesen introduced me to his colleague, Joy Murchie, an English conversation teacher in Sendai. She welcomed my students’ letters and passed them on to her 8th grade students. A few months later her students wrote a letter to my students in return. Although her 8th graders had very limited knowledge and skills in writing English letters, they were able to express their gratitude. My students (10th graders) were very excited to read their English replies because real victims replied to their encouraging letters, something they had not expected. They were also excited because even though the victims were younger than my students they tried as hard as they could to write letters in English.

Activity 3: Listening to a speech

Almost a year after our first activity, my students (11th graders) had a chance to listen to a speech given by Ms. Murchie. In her speech, she talked about Japanese people in terms of eight characteristics: adaptation, appreciation, care, organization, sacrifice, trust, awareness and anger. To help my students understand, Ms. Murchie held up word cards for the characteristics. She also talked about how her students responded after they received our students’ letters. Our students were very happy to hear her story. 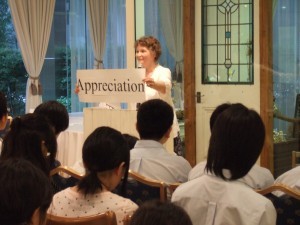 After they came back to school, I prepared a worksheet and had them write the 8 key words Ms. Murchie mentioned and to write their honest impressions of her speech in Japanese. They had less difficulty writing up 8 key words than I had expected, because they concentrated on what she said and made notes during her speech. 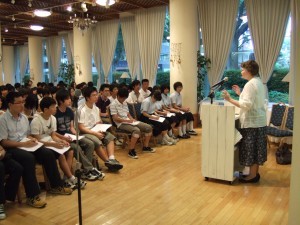 Some of their comments included:

・Ms. Murchie was brave to talk about her real experience of earthquake right after she arrived in Japan.

・I was very pleased to be praised by people from a foreign country and I was very proud of being Japanese.

・I’m eager to help victims as a volunteer.

・I want to be a person who can be considerate to other people and express my opinion clearly in public.

・Younger generation including us should express our opinions to the Japanese government.

・I found the ordinary things to me is splendid for people from other cultures.

・I want to put an emphasis on the bond to other people.

・We must hand our mental generality that Japanese can help each other in severe conditions without seeking a favor in return down to next generation.

・I should have written my letters more seriously. I’m so embarrassed.

・I should have studied harder because I was not able to understand her.

I gave my students two newspaper articles to read. One was about sending notes of encouragement to kids living in the quake zone, and another about assistant language teachers helping with the recovery effort. I chose the first article to remind my students of their experience of exchanging letters with students from the junior high school in Sendai. I chose the second article to help my students remember Ms. Murchie and her work in Sendai. 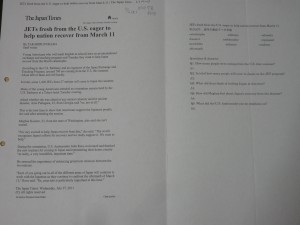 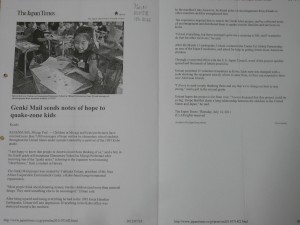 Activity 5: Writing a thank you note

I gave my students one final task, to write a short thank you letter to Ms. Murchie. She was so happy to read them and they were happy to receive their praise.

This big earthquake was a terrible disaster and caused much suffering and loss of life, but through exchanging letters with victims in Sendai and receiving a valuable speech from their teacher, these events made my students aware of the importance of many things, such as the bonds with other people, consideration to others, and the usefulness of English as a communication tool. I hope that the students will broaden their horizons and turn their eyes outward to the world, as well as inward to their own country.

Note: This article by Masatoshi Watanabe originally appeared on Teaching Village, and is licensed under a Creative Commons, Attribution-Non Commercial, No Derivatives 3.0 License. If you wish to share it you must re-publish it “as is”, and retain any credits, acknowledgements, and hyperlinks within it.