It’s time to move: Energy breaks for the language classroom (by Marc Helgesen)

Human beings are not designed to sit still all day. Thousands of years ago, on the plains of the Serengeti in Africa, people walked 10-20 kilometers every day (Medina, 2014). It has only been in the past century or two that people moved to cities. Later we started going everywhere in cars and trains. We might have gotten used to it but our bodies haven’t changed in that short time. We need to move. 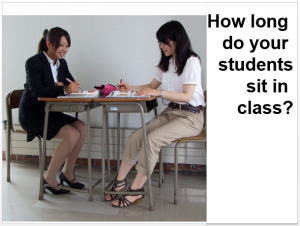 As teachers, we often stand and move around. It is easy to forget how hard it is to say alert when people are just sitting. (If you go to faculty meetings, you might have an idea.) How long do your students sit during class? For most teachers – other than children’s teachers – the answer is “the whole class.” But when people sit for 20 minutes, blood flows south. There is a build-up of blood in the feet, lower legs and buttocks. When we stand up and move for just one minute, there is a 15% increase of blood and, therefore, oxygen, to the brain (Sousa, 2011).

And it pays off in the classroom. 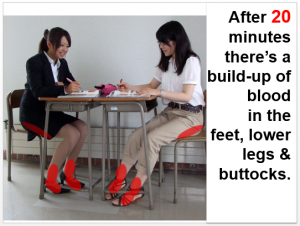 For some time, I’ve been experimenting with “energy breaks” – short bits of physical activity in my classes. They really are short – usually less than five minutes. But it is a great use of time. The students really are energized. They are more ready for the rest of the class. 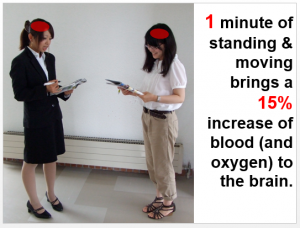 One simple example is “5 right here, right now.” Students identify at least five physical exercises they can do in the space around their desks.  Obviously things like running are not practical but there are many things they can do: jumping, stretching, balancing on one leg, squats, etc. Then students work in pairs. One student in each pair starts an exercise. The other partner starts doing the same exercise. When that partner wants to change the exercise, they make an “X” gesture with their arms and start a new exercise. This continues until the other partner wants to start a new exercise. The whole exercise time only lasts one minute – but it is a minute that re-energizes the whole class.

I’ve made seven short PowerPoint presentations. Each introduces one physical task, along with a “Brain Byte” that briefly explains a bit of neuroscience that I hope they’ll find interesting – and will explain why their English teacher is asking them to do things that previously they only did in gym class.

While you are there, you might want to check on some of the other handouts on various topics.

I hope you and your students are moved.

An earlier version of this article appeared in the Pearson Education Japan e-newsletter.

For additional reading on this topic:

Thanks to my students for posing for the “blood to the brain” pictures.