Kids on Tablets: More Addictive than Pills (by Patrick Jackson)

My ten-year-old son Kai and his friends don’t have crazes in the same way that we did as kids. We had crazes for everything, becoming obsessed by roller-skating, paper planes, conkers, skipping, marbles, hopscotch, spinning tops, catapults and tiddlywinks just to name a few. There was even a craze for knitting one year. There were also crazes for collecting things; cards, stamps, figurines from cereal boxes, beer mats, stickers. You name it and it was probably a craze at some time or other. Battled over, swapped and just as soon dropped, these were the lifeblood of our playtime. I guess that three weeks was the average length of a craze but during those three weeks you couldn’t imagine that it wasn’t going to last forever. Some crazes were seasonal, while others cropped up randomly. We were all over them like locusts while they lasted. During a craze we ate, slept and breathed nothing else. In some ways I guess I haven’t changed.

My son does have one obsession, but unlike the crazes of yore this one hasn’t shown any sign of fading. It’s his iPad – his pride and joy – his precious. I think he would stay on it for as long as we let him; forever probably or until he fell asleep, curled up with it still in his hands. Policing his addiction is a full time operation and I’d be lying if sometimes I didn’t feel like taking it back to the Apple store or just throwing it in the sea. 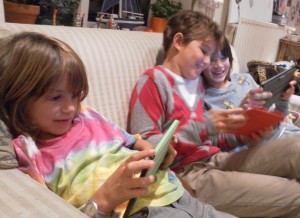 Despite this, there are plenty of positives about having this alien life form in our home. One of them is that Kai now has an instant answer to any question that come to his mind. How did parents cope with all those questions in the old days? Half the time I have to answer “I have absolutely no idea. Why don’t you look it up on your iPad?” I justify this by telling myself that good parenting and teaching is all about giving children 21st Century skills. Knowing where to access information is a key skill, isn’t it? Actually, thanks to his iPad, Kai has become the best-informed person in the house on a wide range of topics. I find myself asking him questions more and more these days. I have been left behind.

The iPad plays a wide variety of other roles. More than a plaything it is really a playground. There are creative activities like drawing with an app called Brushes and building things in Minecraft. There are apps for dismantling things. Taking photos and manipulating them would fall into the creative category, too, as would making music. He spent a lot of time last week putting moustaches on his mother and sister (a useful skill for sure) while listening to music he had written himself. Many of these pictures end up on his Instagram account or are sent off to his friends using Snapchat. Then there’s reading on his Kindle app. I haven’t found a reason why that shouldn’t be encouraged even though it has largely replaced paper books. He’s certainly reading more than he used to.

There’s ‘research’ which usually means watching cool documentary videos on YouTube –  “Awesome! World’s 10 Deepest Holes!” or when he’s feeling more serious, TED talks. Exploring the world with Google Earth, and using Google translate to translate all sorts of rude words into dozens of languages are other educational activities he enjoys and we encourage. Not so sure about making Siri say silly things but it’s certainly fun. As I write this, he is on the sofa next to me using a simulated surgery app to remove an ingrown toenail from a patient. Nice.

The real gold for him is the 30 minutes during which he is free to play whatever he likes, the only limitation being that we don’t like him to play shooting games or communicate with strangers. His iPad has a mind-boggling range of extraordinary and wonderful apps. Running apps, jumping apps, squishing apps, hopping apps, empire-building apps and, of course, apps where he develops the essential ability to catapult birds at distant structures built by pigs. God forbid I deprive him of that important future skill. Another particular favourite at the moment is a game called Plague Inc. That involves creating a virus and trying to infect the whole world. His proud parents believe that this suggests he may be drawn to the medical profession.

So what’s the problem, apart from having kids that know way more than their parents? Well, the iPad is a highly addictive device and, like any drug, its use needs careful supervision, quality control and regulation. Like any drug addict, Kai is very good at finding ways of stretching the rules when it comes to his iPad time. He knows that we won’t stop him reading. He knows that if he wants to use it to take pictures or draw we’ll usually let him. He is clever at getting his hands on it to listen to music or a podcast while he does another activity. He will often ask us to check something or look up something that crops up in conversation. Often enough, we just have to say “Not now” despite the fact that what he is asking to do is perfectly reasonable. I even find myself asking him to look up things in books sometimes when I know he could find the same information way quicker on his iPad.  In the tradition of many addicts, he will also be somewhat economical with the truth when it comes to telling us how long he has already been on and how much time he has left and of course there is that post-iPad slump when he has to stop.

We are the first generation of parents to have had to deal with this wonderful machine and it’s a whole new ball game – except it isn’t a ball game. You get exercise and fresh air from a ball game. I think we should always ask the question “What would this child on the iPad be doing were there not an iPad there?” Often the answer is that the child would be doing an activity that is more active, more physical, more communicative, more tactile and more real than anything within the confines of a small rectangular screen, however clever and beautiful it might be. Clearly there needs to be balance, firm parenting and agreed limits. Without those in place this is a craze that is going to rob our children of a lot of the best things about childhood. In the classroom, teachers need to ask similar questions; “Is this activity being improved by the presence of the iPad? What is the iPad adding to this activity as it would have been done in the old days?”

I was thrilled when I heard that we were developing an app for Potato Pals (a series of readers I wrote ten years ago for young learners of English). We wanted to include as much of the positive potential of this amazing tool as possible, creating something that took the books to another dimension while keeping with their original spirit. I am delighted that the resulting app allows children to learn, be creative through storytelling and song, collaborate and share. They can watch and listen as the potato characters come to life. They can sing the songs, play with the pack of picture cards themselves, and most importantly, make narrated versions of the stories starring themselves as potatoes. I defy anyone who tells me that turning children into potatoes isn’t an important 21st Century skill. I also suggest that any teacher who won’t spudify themselves for their students is seriously short-changing them funwise! 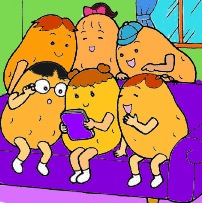 These are fabulously exciting times for parents and educators. We are fortunate to have tools at hand that have never in all of human history been available. As well as the 21st Century skills that everybody’s going to need, I would suggest we also develop in our children, our students, and ourselves, the ability to control our addiction to technology, the ability to discern when we are wasting our time and the ability to switch off and pay attention to the real world around us whenever we can.

The Potato Pals app for iPads is available on the App Store.