I saw a really interesting article posted on Facebook, entitled ‘Photos of Children from around the World with Their Most Prized Possessions’. For those who haven’t seen it, the article shows images of children in their home settings, surrounded by a selection of their favourite toys, and there are comments left by viewers of the article generally saying what a lovely idea it is. Several users suggest that the collection would be a good idea for a children’s book and advocate that the images could be used to educate children about other countries and cultures.

Before I continue, let me make it clear that I think the idea for the images, as a piece of art, is a good one. I like the collection because it is interesting and makes me consider my perceptions. However, I am concerned at the way so many people have taken these images as being a true reflection of the countries and cultures they were from. If the photographer was genuinely trying to capture children and their toys, why take some pictures with children smiling and some without if these are the children’s favourite toys? Why not take images which showed the children playing with them naturally instead of arranging them for the photos? It would take time to sit and observe them playing, but the wait would be worth it to capture that perfect moment on film, when you have blended into the surroundings and have become a fly on the wall.

The article, comments and likes it generated got me thinking about the perceptions of the world around us that are being portrayed in the media and in society. I am lucky enough to work with children. Earlier this year, I played the song ‘Do They Know It’s Christmas?’ and asked my class if everyone in Africa was poor. Every child confidently asserted that the whole continent was poor with some children going on to explain to me that this is why we “have” to give “them” money. There was no concept of individuals or that there may be wealthier areas, or even that there may be some similarities between Britain and African countries or culture. I was quite shocked at this lack of global understanding.

My class are not the only ones to hold these silent perceptions. A teacher friend of mine is looking at Africa and poverty with her class. As an introduction to the topic, she asked them what poverty is. The children seemed to have a grasp of the concept. She then asked them if people in their town were living in poverty and, just as I had experienced, the whole class said no. They were unaware that poverty exists in the UK as well as abroad. My friends and I teach in different areas so we cannot attribute this lack of knowledge to the area or upbringing of the children.

These experiences have led to me to consider firstly, whether these perceptions are accurate, and secondly where they are coming from. I have spent a long time ruminating on the fact that everyone is entitled to their opinion, everyone has different experiences which influence views and nobody is obligated to understand or empathise with another individual’s socio-economic situation, race or culture. But even if they don’t empathise or understand, shouldn’t we at least be encouraging people, especially children, to question their knowledge of these things?

When I asked my class why they thought everyone in Africa was poor, they specifically referenced promotions like Comic Relief and Children In Need. The images shown in these kinds of programmes are focussed only on extreme poverty but are labelled as being a reflection of the whole country. Children are watching these programmes and taking away a stereotype that is completely inaccurate as a representation of a nation. This also has a knock-on effect on understanding of other ethnicities and racial groups in Britain. Whilst the sentiment of the promotions is definitely commendable, and one which should be encouraged, the way it is done needs to be evaluated.

Although stereotyping seems embedded in our society, I don’t believe it is intentionally perpetuated. I feel people are just simply unaware they are doing it. The media surround us with images of people who are emaciated and have unclean drinking water. If 3rd world countries do not have any clean water, why do people go on holiday there? How have people survived in these same villages for hundreds of years? I am not saying we should not give help if and where we can, but I am saying we should start thinking about how we’re approaching it. Instead of perpetuating ideas like it’s our duty or moral responsibility to help those less fortunate than ourselves (there is a philosophical discussion to be had there) we should be seeing people as equals and saying I don’t want/need/use this so if it is of help to you then take it. However, we should be extending this to all people and not just those deemed as living in certain countries. America is known to have a huge poverty issue but we do not see images of children from that area in our media. Why is this?

The National Curriculum lists objectives for children to develop such as “to reflect on spiritual, moral, social, and cultural issues, using imagination to understand other people’s experiences” (Citizenship 2e). On the surface, this is a worldly aim which encourages understanding of diversity. However, there is an issue in the fact it states to use imagination to understand other people’s experiences. How can children, some of whom have never been abroad, be expected to form a realistic imagined experience of geographical areas or people they have never been into contact with? For example, many people are told not to stare at people with physical impairments because it is rude. I would suggest it is only rude if you are staring out of ignorance and doing nothing about it. Would it not be better to make eye contact and treat people with any kind of impairment the same way that you’d treat anyone else? Would it not be better to create a culture where talking openly and asking questions was encouraged? This would allow people to gain a first-hand account of the experiences they do not have rather than to imagine things in a superficial way.

Another objective is “to recognise and challenge stereotypes” (Citizenship 4e). If extreme poverty and messages of how we can help others is all we expose our children to, are we really preparing them to be global citizens? Our children cannot recognise a stereotype because they have nothing to compare it to. Some have not travelled very far afield during their school lives and therefore take the imagery and facts society exposes them to as being true, particularly if they are shared by a trusted or respected adult.

There is a topic about Chembakolli, a rural village in India, which many children study in Key Stage 2. It is based on learning about localities and cultures other than Britain’s and there is nothing wrong with this topic in essence. It does inadvertently perpetuate a stereotype for children by not being a true reflection of India. There is no doubt India has poverty (as does Britain) but there is a difference between poverty and village life. The topic, and teachers, does not make this distinction very clear for children and this leads to misunderstandings. These misunderstandings filter into British culture because people take images and facts about places like Chembakolli and apply them to the whole population as if they were an accurate representation.  This then leads to tensions and divisions between groups in Britain. 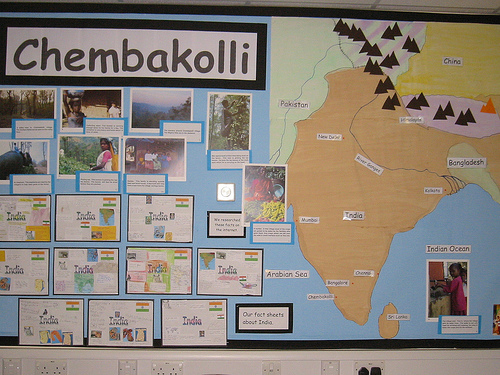 In addition to this, the language that is used in referring to other nations such as ‘3rd world countries’ also needs to be reconsidered. It encourages people to subconsciously form the perception that these countries are vastly different to developed nations because they are ‘worlds away’ and not ‘1st’ like Britain or America. There is a focus on the extreme differences between nations and groups of people instead of looking for similarities or common ground, which fuel negativity and misunderstandings.

How can we remedy these issues? The problems that are arising in societal perceptions can be addressed by a small shift of mind and an intrinsic realisation of what the Dalai Lama calls ‘the oneness of humanity’. Within society, we need to cultivate an attitude of seeing others as individuals and not as something we need to label, categorise or take responsibility for. The latter values are remnants of an empire which was driven by government and power. If we do not address the issue of cultural knowledge, perception and understanding of both the positive and negative aspects of our own nations and those further afield, Britain is in danger of cultivating a fragmented, divisive society, instead of the multicultural, cosmopolitan population it could be.

Note: This article by Kieran Dhunna Halliwell originally appeared as a guest post on Teaching Village and is licensed under a Creative Commons, Attribution-Non Commercial, No Derivatives 3.0 License. If you wish to share it you must re-publish it “as is”, and retain any credits, acknowledgements, and hyperlinks within it.