The Little Girl and the Golden Bird (by Malu Sciamarelli)

Stories from the Garden

In February, Malu wrote “Where do your stories come to life?” for Teaching Village. She shared her first story from her garden in May (The Little Girl and the Magic Words). I’m thrilled to share another original story from Malu’s garden. Barb 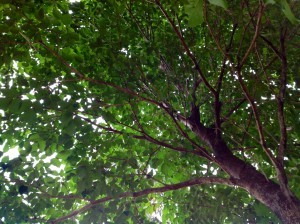 Among the many treasured trees in the little girl’s garden, the mulberry was her favorite. She loved climbing the tallest trees from which she had a view over the whole garden, and spending hours eating mulberries, talking to the tree, flowers, birds, bees, ants and all the varied insects she could see.

What a joy it was to come back, with her lips all red from the berries, contrasting with her pale skin and golden hair, and tell her dad she was full of blood, make up horror stories just to get kisses and hugs, and laugh together!

These lovely purple berries  were her favorite fruit, and one day not finding any in the lower boughs, she decided to climb higher and higher and higher. When she finally found more berries, she saw a little door among the branches. As it was open, she decided to go in. To her amazement, it was a beautiful crystal dome, with tiny chairs all fringed with gold and when she touched one of them, a little bird came through the door and started to talk to her. The bird was astonishing! He was made of gold and moon dust, and with a long thin beak of the clearest crystal. When he talked, the crystal emitted the most beautiful and purest light.

Never having seen a talking bird before, in spite of talking to all living beings herself, she could not contain herself and reached out her hand to touch him. However, the moment she did this, his eyes turned black and his tiny body started to disintegrate. The beak was the last part to vanish, and before he crumbled into gray dust, he said: “take my beak – it’s magical and soon you will know what to do with it”, and then he was gone.

The little girl was devastated. She couldn’t stop crying, as she was climbing down the tree. For several days, she stayed in her bedroom looking at the crystal beak in her hands. Then one day, she decided to go back to the garden clutching the crystal beak tightly in her hand.  As soon as she started to walk among the trees, she saw a bird with a broken wing lying on the grass. She immediately took it in her hands, not knowing exactly what to do. To her surprise, the crystal opened up and a strong golden ray of light blinded her. The intense light seemed to flood her hands with a scorching energy and just as she thought she could bear it no longer, the bird that was lying almost dead, flapped its wings tentatively at first then flew away. The wing had been  healed by the light in her hands!

And this was the secret the golden bird said the girl would find out. The golden bird had been waiting for someone to come, to get his crystal beak and with its light, heal all the hurt animals in the garden! As soon she understood it, she was not sad anymore. Since then, she’s been walking in all the gardens in her beautiful world, looking for wounded little creatures and healing them with the magic golden light from the crystal beak in her hands.

Note: This article by Malu Sciamarelli originally appeared as a guest post on Teaching Village and is licensed under a Creative Commons, Attribution-Non Commercial, No Derivatives 3.0 License. If you wish to share it you must re-publish it “as is”, and retain any credits, acknowledgements, and hyperlinks within it.