Child Learning Through Child Play (by Marco A. Brazil)

10 Great Games that you can do with your Paper Cups, Paper Plates, Toilet Paper Rolls, Clothespins, and Bottle Caps

The best way to develop speaking skills in very young learners is to get the children to talk, but to do that very young learners need exciting experiences so they will have something to talk about. You don’t need to spend a lot of money to create these experiences. The materials for these games are all free or very inexpensive.

I’m including some examples of how I use these materials in my lessons, but the way you will use them depends very much on your students, and on you. Even if you use the same activity with different students, you’ll find differences. For some students, the activities will be too easy and you’ll want to increase the challenge. Other students might find them challenging and you’ll want to switch to a  simpler approach, or let go for awhile and come back to it later. That’s the beauty of simple materials and simple activities — they are very easy to adjust. It’s important to remember that activities for the very young learner must be matched to the child’s own rhythm, not the other way around.

To prepare, write the letters of the alphabet on the bottom of 26 paper cups.

My little ones are filled with excitement and anticipation seeing how high their paper cup tower can get. Give each child 26 cups (with letters of the alphabet printed at the base of each cup). You will also need several circle cut-outs of hard construction paper, alternately used as floor base for each level to make the tower stand. The child builds four, three, two, and one to make a tower while saying the alphabet from A to Z. 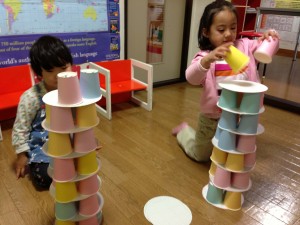 Place twenty-six paper cups upside down in-front of the class in random order. Ask the children to close their eyes or look up the ceiling. Hide three or four mystery objects inside the paper cups. One at a time, children try to find the objects by choosing a cup and saying the letter written on it or the sound the letter represents. Younger children can tap the cup while you say the letter and then repeat the letter name or sound. 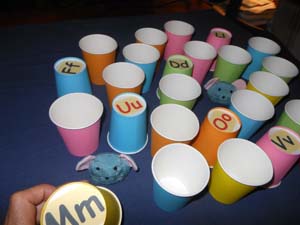 Take away three or four cups and place the remaining cups in random order in front of the class. Children won’t be able to see the letters because they’re on the bottom of the cups. Children turn over the cups and identify the letters. When all the cups have been turned over, children say the four missing letters (cups). 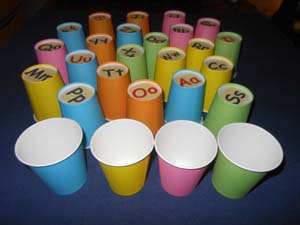 Take several paper plates. Divide each plate into six equal parts. Color each section a different color (red, blue, yellow, green, orange, white). Collect enough colored clothespins so that each child can have at least four of each color and place them in a tray. Make a colored die to match the colors on the plates. Children roll the die and place the appropriate clothespins on the color wheel. The aim is to have clothespins for each of the six colors on the wheel — like a bingo game. 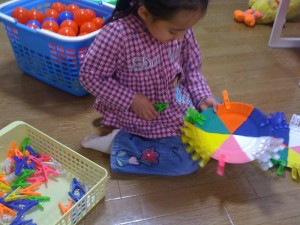 Write one of the alphabet letters on each of 26 plates. Spread these out in a circle on the floor and then have the children march around the letters while music is played. When the music stops, each child should find a letter and stand on it. As you point to children, they identify the letter they are standing on.

In turn, children take a letter roll and using a clothespin attach it to another letter roll, forming a long bridge. Children can also connect the rolls to spell words. 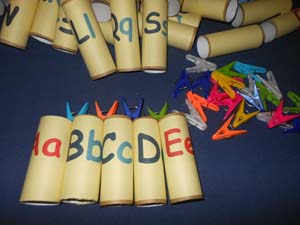 Give each child 26 toilet paper rolls (with all the alphabet letters). You will also need several circle cut-outs of hard construction paper to use in between each level to help the tower stand. Children build towers while saying the letters on each tube they use. 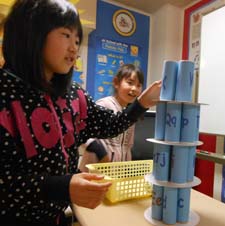 To prepare, label the top of bottle caps with alphabet letters A-Z.

Use a set of 26 caps (one for each letter). Take away three or four bottle caps and place the remaining caps in front of the class face down (so they can’t see the letters). Children turn over each cap and identify the letter. When all the bottle caps have been identified, children say the missing letters.

Children use multiple sets of bottle caps (letters) to form words as in a game of scrabble, starting with three-letter-words then four-letter-words. 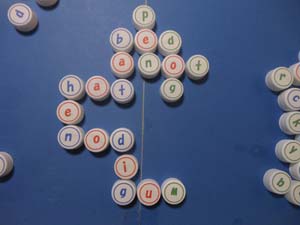 As the name of this game implies, children build a pyramid out of 26 bottle caps while saying the alphabet from A to Z. 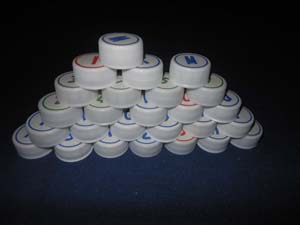 Note: This article by Marco A. Brazil originally appeared as a guest post on Teaching Village and is licensed under a Creative Commons, Attribution-Non Commercial, No Derivatives 3.0 License. If you wish to share it you must re-publish it “as is”, and retain any credits, acknowledgements, and hyperlinks within it.