What I learnt from my German Teacher (by Christopher Wilson)

Let me start off by saying I was not a good German student.

I found learning languages very hard at secondary school and only took German because I had to study a language and I found it easier than French (despite studying French for longer).

During the run up to my GCSEs (Secondary school exams in England for students between the ages of 15 and 16) I would regularly become “ill” on the Wednesdays when my German classes were, sometimes even recovering by the time my next class started! Amazingly no one caught on. All this led me to lag further and further behind my classmates.

Add into that my dyslexia which made me even less motivated and which I used as an excuse for my poor performance (and lack of effort). I was probably the worst student you could wish upon a language teacher. Unmotivated, no concept of the value of learning a language, sporadic attendance, learning disability, and a moody teenager.

Everyone expected me to fail my exam except my German teacher. 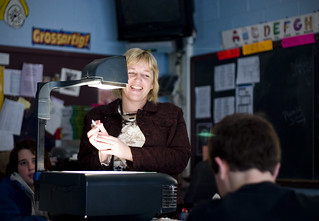 My German teacher was from Austria and had lived in England for some time. She worked in my school which had a larger than average number of students with learning disabilities and was full of enthusiasm.

She kept encouraging me to try harder, kept rewarding my effort and pointing out when I did get things correct.

As my exams approached she helped me to focus on the topics that I liked and I was good at, but she also helped me with activities I struggled with but needed to know for my exam. She invented silly rhymes that stuck in my head all day.

And it changed my attitude.

With my exams looming and my new attitude, I realised I needed this exam grade and that I actually enjoyed my classes, despite my attempts to convince myself that I didn’t!

In the end I actually passed my exam and when I went to collect my results I saw my German Teacher. She was smiling from ear to ear and congratulated me before I even got my result. I honestly think she was happier with my C than the 3 A’s in my class.

Her dedication and hard work has stuck with me.

It can be easy to get annoyed at the unmotivated student in the back of the classroom or feel overwhelmed by the student with the strong learning disability. Sometimes it feels like the only thing we can do is wash our hands of them and leave them to do the best they can. But then I remember her hard work and how she converted me from the worst student and made me actually achieve something.

I may not have stolen great ideas from her style of lessons but I definitely aim to steal her attitude.

Have any of your teachers inspired or affected the way you teach?

Note: This article by Christopher Wilson originally appeared as a guest post on Teaching Village and is licensed under a Creative Commons, Attribution-Non Commercial, No Derivatives 3.0 License. If you wish to share it you must re-publish it “as is”, and retain any credits, acknowledgements, and hyperlinks within it.