Little teacher me in the big ELT World (by Yitzha Sarwono)

My reflections about Jalt 2012

When I found out that I was going to Jalt 2012 in Hamamatsu, Japan, my first reaction was jumping up and down for I was so excited! Then I froze! Geez, what would someone like me be doing there? I mean, Jalt would be my very first international conference ever! I’ve been to national conferences in Indonesia before, the last was JELTA in September. But of course, going to a conference full of people who speak the same language and are similar to you in a lot of ways is totally different from going to a conference where you’d see many people from many countries with different backgrounds and different teaching conditions too. But I wasn’t going to worry about that; I was more worried about my part of a presentation, which was about activities for teaching critical thinking to young learners. 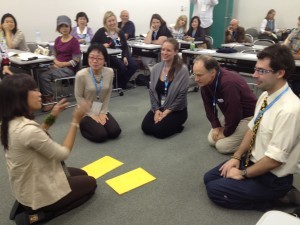 Workshop on critical thinking for YLs

As soon as I arrived in Japan, I sensed a different atmosphere than what I’d experienced at conferences in Indonesia. First of all, everything had been organized nicely! The conference handbook was filled with a lot of information to help you to decide which workshops or talks you’d want to go to, as well as other information you’d need during the conference. 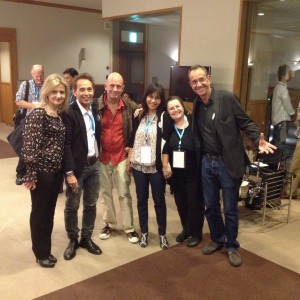 At the welcome reception for JALT 2012

If I have to tell you what fascinated me the most about the conference, aside form the various incredible presentations, it was the participants there! Everyone was a smile away! You literally could talk to anybody there, and everybody was not only very kind but also willing to share with you their point of view, as well as interested in listening to your opinion too. Nobody was too good for anybody else nor unwilling to engage themselves in conversation. This is so different from my experience in attending conferences in Indonesia where everyone would most likely be too shy to ever involve themselves in a discussion with new people and tend to stick with their trusted friends. 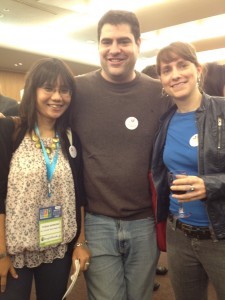 On the first night of JALT, during the Oxford University Press welcome party, Tim Thompson (@timknowsefl) challenged me to get at least 20 name cards which at that time, I found very frightening to do. How would I start any conversation and get those name cards? Who would want to talk to a little Kindergarten teacher like me? But as soon as the conference kicked off, I learnt that it wasn’t an impossible mission like I thought because everyone welcomed the opportunity to share knowledge and stories about themselves and what they do. And I jumped into as many conversations as I could. I didn’t want to miss any opportunity to get to know all these fabulous people and their fantastic work! And just like that, I went from being someone who was afraid of not being able to fit herself to the environment to someone who was ready and eager to talk and share my opinion and experiences with everyone. I also learnt that all teachers matter, whether you’re teaching Kindergarten or University and we were all there for the same reason: Personal Development. And now I have many new names to put into my PLN list! I don’t think I could mention them one by one but I do hope they know that I am grateful for having them on my list. 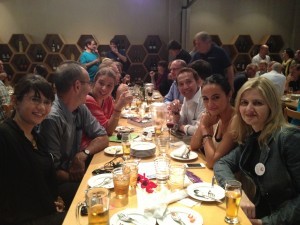 Oh and yeah, I got 28 name cards by the end of the conference and I’m happy to say that I’ve sent an email to each of them to tell them how happy I was to have met and learnt from them all and hope that we can stay connected, both professionally and personally. I must thank iTDi and especially Barbara Sakamoto and Marco Brazil, who were so kind to me during and while preparing for the conference, as well as Tim Thompson who with his challenge has shown me the true meaning of PLN.

Note: This article by Yitzha Sarwono originally appeared as a guest post on Teaching Village and is licensed under a Creative Commons, Attribution-Non Commercial, No Derivatives 3.0 License. If you wish to share it you must re-publish it “as is”, and retain any credits, acknowledgements, and hyperlinks within it.