The Halloween party that almost wasn’t

However, I’ve been traveling for workshops a lot for the past six months, and have had to cancel quite a few classes. During the last week of September and the first 2 weeks of October alone, I was home for 6 days. So, I thought parents might actually prefer that I let Halloween pass without notice this year, and get back to the business of having regular English class.

Then, Ha-chan came up to me after class to tell me that she was going to be a princess this year. She was a witch last year, and quite envious of the one princess who attended the party. (You can see the costumes in this post about last year’s party.)

I couldn’t disappoint a 4 year old princess, could I? 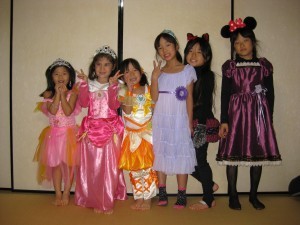 Halloween 2011: The year of the princesses

So, I dug out the Halloween decorations and headed down to the 100 yen store for the materials needed to plan a very quick party. Like the mom sneaking veggies into a meal, I hoped to have a couple of fun Halloween party games that snuck in some good language practice.

During the party for the younger kids, we played a matching card game to practice modifying nouns with adjectives (black cat). Packs of colored blank name cards make great playing cards for little hands. The rules are similar to Uno–you can play a card that is the same object (a ghost, for example) or the same color as the previous card played. Students have to describe the card they play (blue ghost). Add in a selection of cards to reverse the order of play, skip a player, change the color, etc., and you have (what my students declared was) a fun game. 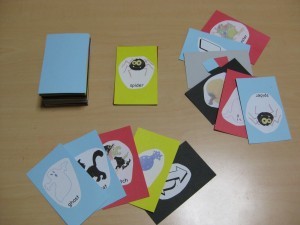 The younger kids also enjoyed singing “Five Creepy Spiders” from the Super Simple Halloween CD, and moving as if we were spiders crawling, skeletons dancing, black cats running, witches flying, and ghosts haunting. The enhanced CD also had picture cards and activity sheets, which provided the art for our games and nice take-home Halloween homework packs.

The older kids didn’t want to dress up, but still wanted a party. They made their own game to practice pesky word order in sentences. I gave them four milk carton cubes and had them fill the 24 sides with eight nouns, six adjectives, six verbs and four conjunctions. Because it was for a Halloween party, they used appropriately spooky words (vampire, scary, drooled). On each turn, students wrote down the words they rolled on each of the four dice. When they collected enough words to make a sentence they earned a point. 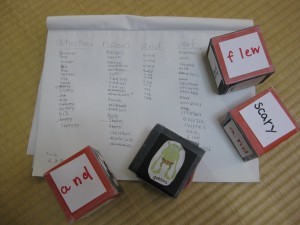 This game turned out to be a bigger winner than I had anticipated. In fact, they had so much fun making sentences that they didn’t want to move on to other games and activities and nearly skipped the food and drinks part of the party, too.

For 500 yen (for the cards) and about an hour’s preparation time, the “parties” turned out pretty well. Turns out that all you have to do is announce that it’s a party rather than a class, provide a few theme activities and a bit of food. Students supply the party attitudes all by themselves.

My little princesses went home satisfied for another year 🙂