The Blasted Oak (by Torn Halves) 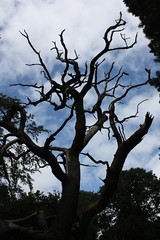 This is the story of a sensitive soul who decided to teach English as a foreign language. Like other such souls she was acutely aware that the world is not as it ought to be. While at university she had seen fellow students flocking to the careers fair and queuing up to become employees of the big corporations, ditching their ideals (if they had any) for the best possible pay check. She wasn’t going to ditch her ideals, and becoming a teacher seemed to be a way of joining the forces of good.

One of her hopes was to inculcate a love of the subject. Knowing what remarkable voices are to be heard in the more thoughtful corners of English-speaking culture, she wanted to bring students to the point at which they could really hear those voices and feel them in the core of their being.  What she hoped was to begin what could become a lifelong dialogue in English, with students beginning to feel at home in the language and finding that some particularly eloquent works in English have become part of their private cultural worlds.

The sensitive soul left her motherland, travelled to Greece and found work in a small school in a rather poor neighbourhood on the edge of Athens. The intense newness of everything helped stop her being deterred by the sight of the box-like classrooms, with the rows of immovable benches and desks facing the front, the stark white walls with only one decoration above the blackboard at the front: a small icon of Christ gazing up to a turquoise heaven and seeming to say: “Father forgive them for they know not what they do.” No she was not deterred.

Soon, though, the rocks on which hopes are dashed began to appear. One had to do with time and childhood, and the fact that her lessons were adding to a schedule for her students that was already too full. She wanted her students to enjoy what was left of their childhood before being cast into the loveless world of work, and to have enough free time to grapple with what maturity was to mean to them. So she began to feel guilty about overloading students with extra lessons, knowing that most students would only be able to cope with such a heavy schedule by taking no particular interest in any particular subject.

EFL may be just one in a long list of evening classes on which students feel forced to enrol, but the sensitive soul hoped that English could be a lesson with a difference. Other rocks appeared. Employers demand certificates and parents want tangible proof of progress, and time, being money, is limited, so there is a rush to prepare students for exams. The books she was given to teach were all about exam preparation, and they were books so thick that there was no time left for anything else.

She thought for a while about exams, and felt that English exams could have been different. Surely something could have been included to value a student’s personal response to one or two works in English. Texts could have been chosen that students might actually want to go into in depth. Students could have written on topics geared to their interests, and write at their own pace, drafting and redrafting their work with feedback from their peers. Such coursework could have been an important part of the final assessment.

As it was, the reading exercises she had to prepare her students for put all the weight on forms of speed reading for which a genuine interest in the text would have been a definite handicap, and the essays had to be written in a time so short that there was no opportunity to do anything other than re-heat pre-processed, pre-cooked ideas.

Teaching can kill. And when the language is reduced to rules, lists and endless cloze exercises, and students are put through their paces again and again until they can tick the correct boxes, and along the way are denied the chance to make the language their own, the prognosis is not good.

Reflecting upon this, the sensitive soul realised that her beloved language had been reduced to an instrument, a tool of no intrinsic value – a language so devoid of expression it began to seem dead. The voices that turn life into poetry went unheard and the hoped-for lifelong dialogue was stillborn. She realised, too, that her students were being trained in a horribly cold and thoughtless kind of efficiency. The sensitive soul had hoped for something more. Now she is racked by her complicity and she despairs at the thought that if the hope for something better cannot be nurtured in the realm of education, where else?

Note: This article by Torn Halves originally appeared on Teaching Village, and is licensed under a Creative Commons, Attribution-Non Commercial, No Derivatives 3.0 License. If you wish to share it you must re-publish it “as is”, and retain any credits, acknowledgements, and hyperlinks within it.