Some people fear that in the race to make Indonesian students more global, they may be losing the sense of what it means to be part of the Indonesian nation.

August 17th is Independence Day in Indonesia. Just like other countries, on this day we celebrate the history of how Indonesia became a nation. When I was a student, I felt like I was drowning in nationalism, even when it wasn’t anywhere near Independence Day.

Most Indonesians my age can recite the preamble of the Constitution of Indonesia and the Indonesian Proclamation. In school, we also had to memorize the names of all of our heroes along with National songs. Our government back then made sure that all children appreciated Indonesian history. We were proud of memorizing all the dates and tiny details about the battles of our heroes in their fight to form this country.

Time changes things, including governments and education policies. In hope of preparing future generations for the so-called Global Era, most schools nowadays try to be more international, which means they use English in school with more world-based lessons. People hope that this will make our children ready for the world.

But, people are also concerned that perhaps children have become too global and are forgetting their roots. Not many students can recite what I and my generation could. Not all remember Pancasila or can sing national songs. It somehow brings a sad feeling to many knowing that with their new curriculum, that was supposed to make them able to compete with the rest of the world, Indonesian children are in jeopardy of losing their identity.

I too became concerned about it, especially since the media also sometimes like to exaggerate things by saying that the current generation has lost itself. But I realize that there are actually many ways for our students to connect with the world while staying true to who they are.

One of the things we can do is to take students to museums. Here in Indonesia we have ‘Taman Mini Indonesia Indah’ or the Indonesian mini garden, a place where all our rich cultures are shown. Students can walk through real-sized traditional houses from all over Indonesia as well as touch traditional clothing. It’s not a boring museum where they exhibits are all in glass boxes. 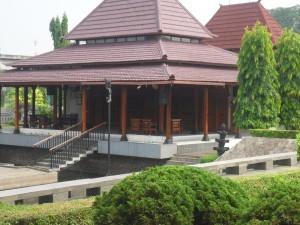 Here we can ‘travel’ all over Indonesia because each province has its own mini garden and we walk from garden to garden to travel to each province. When I took a class, we actually found it hard to visit each province during our visit there.

Another way is by including it in our curriculum. Lucky for us, lessons about Indonesia are already in included in a week-long thematic unit in our curriculum. We talk about Indonesian clothes and food in English, and sing Indonesian songs. It may not be enough time, but we always try hard to make sure we include things that will help students build a sense of pride about being Indonesian. It is actually kind of funny to teach about  Indonesia in English, but then again it’s not about the language but how they feel  when they learn it.

Another fun and effective way to build national pride is by celebrating our important holidays; such as Independence Day, Heroes Day, and Kartini’s Day. We actually have plenty of national days but these three are the most popular ones celebrated in Indonesia. Here are ways we celebrate:

• On Independence Day, we celebrate by having a formal ceremony of saluting our Flag and singing our anthem. We also have many traditional competitions, such as moving the flag, carrying marbles in a spoon, and so on. The aim is to make students realize that to win something we have to fight for it. Both children and adults can participate.

• On Heroes Day, we usually ask students to dress up like one of our famous heroes. The goal is obvious, to introduce students to our heroes and hopefully have them learn a thing or two about the fight for Indonesian freedom. We also read or let students watch movies about Indonesian heroes.

• On Kartini’s Day, we celebrate the diversity of our culture by asking students to dress up in traditional costumes. You have no idea how it feels to see students looking all gorgeous and handsome in our national costumes. As this is an annual celebration throughout Indonesia, many places that rent the traditional costume having a hard time keeping up with the demand. Sometimes students have to be satisfied wearing whatever is available rather than their first choice because they have no other option. We usually celebrate the day by having parades and fashion show competitions. It’s always exciting to see not only the students but also the parents taking part in this. Many parents take a day off from work on the day just to be able to accompany their children to school. 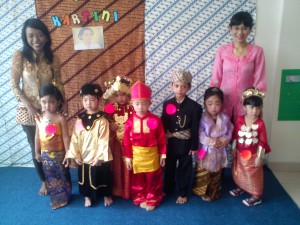 Dressing up for Kartini’s Day

With all these opportunities available, and the fact that many people still care about Indonesian culture and traditions, I’m not too worried about children forgetting their roots. It’s true that many of our children may not feel as much pride or understand our history in as much detail as we did when we were their age. But things evolve.

We cannot really hold back globalization, even if we wanted to. But then again, it may not be a bad idea for children to have parts of them belonging to the world while the other parts are still carrying their Indonesian roost. I mean it will make us all feel as part of one big happy world. And it’s good thing, because when we feel like we share this world with others, we may be able to stop prejudice and hate. I’m an optimist. As long as we continue to introduce Indonesia to our students, I’m not worried about them becoming too global.

Note: This article by Yitzha Sarwono originally appeared on Teaching Village, and is licensed under a Creative Commons, Attribution-Non Commercial, No Derivatives 3.0 License. If you wish to share it you must re-publish it “as is”, and retain any credits, acknowledgements, and hyperlinks within it.