If you walk into a neighborhood in my part of Japan, you’ll see a display like this somewhere near the entrance. It’s a map showing all of the houses in a neighborhood, and the names of families who live in the houses. Do you have something like this where you live? 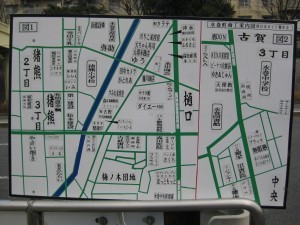 None of the streets in the neighborhood are named, but the blocks are numbered. So address plates look something like this: 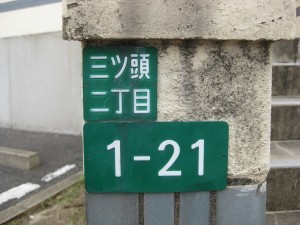 Imagine looking at the large google map of Japan and gradually zooming in until finally you’re looking at one house. That’s the feeling behind explaining where someone lives.

This is the opposite of the way I grew up thinking of location, which was moving from the small to the large (number, street, city, state).

In one of my favorite (and shortest) TED Talks, Derek Sivers shares several surprising ways that culture shapes our way of looking at things: Weird or just different?

Knowing where your students are coming from makes it easier to anticipate what they might find difficult (or just strange) in class.

Staying with my locations example, virtually every adult course book has a lesson on asking for and giving directions on a map, and even in classes where we don’t use a course book, students ask for this topic. They’re interested in part because it’s so different from what they’re used to. If I know or can help my students tell me what they find surprising, or different, I can do a better job of teaching the language and making it useful.

For example, if I know that the idea of intersections getting their names from the two intersecting streets is going to be a cultural surprise as well as a linguistic challenge for my students, I might want to allow more time for this part of the lesson, and be prepared to provide a bit of cultural background.

It’s also useful for students to fit the new language into their more familiar culture. These days, I always bring in a local map, and let students figure out how to use the lesson vocabulary (usually things like turn right/left, go __ blocks, it’s on the right/left/corner, etc.) in a more realistic context. It helps them own the language by making it meaningful. They are also more likely to encounter tourists trying to get to Kokura Castle than they are to be in Manhattan asking directions to the Empire State Building.

How does culture matter in your own teaching?

What differences, if any, have you found between your students’ culture and the culture of the language they’re learning? Were there any differences that surprised you? Do they affect the way you teach?

I look forward to hearing from you!