Children learning English as a foreign language tend to develop oral language skills before they become literate. In countries like Japan, where the grammar structure and writing system of English is so different from students’ first language, students can sit in English class for years before having to deal with anything beyond the ABC song.

In the future, I’ll share writing and reading activities appropriate for pre-literate learners, and those who have conquered the mechanics of writing (but still need work on accuracy and fluency). Today, I want to share a very simple  activity I use with emergent readers and writers.

I see my students one hour each week, so this work was spread over several weeks. Small bouts of literacy work spread over time are more effective (in my experience) than an entire hour dedicated to writing. While this is an example of one story created by one of my students, you can easily do the same thing with an entire class, or with groups within a class.

Step One: Find something to talk about 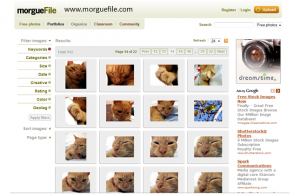 I know Riri loves animals, so I brought in multiple pictures of a cat I found on Morgue File (a public image archive). Actually, I downloaded the photos last year for another class, but everything is recycled in my lessons 🙂

I printed out the photos so they would be easier to arrange and discuss, and we started by describing what Rocco the Cat was doing in each of the pictures. Riri used the words she knew, and I added the ones she wanted but didn’t know in English.

Me: Do you think he sleeps a lot?

Riri: Yes. He sleeps a lot.

Me: What’s he doing here?

Me: He’s eating a telephone cord? 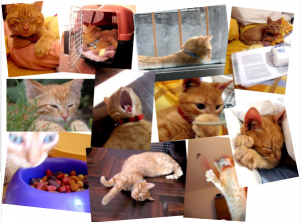 Step Two: Choose pictures for the story, put them in order, and talk about the story

In the next class, we pulled the pictures out again and began by talking about them to activate the language we’d built during the previous class. Then, I asked Riri to put them in order so we could tell a story about Rocco. She deleted some of the photos and put the remaining pictures into an order that made sense to her. 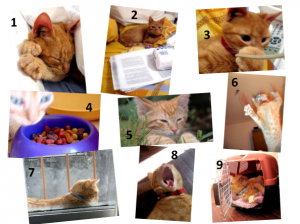 Riri decided her story would be about Rocco’s day. While Riri can write, she finds it frustrating because her writing skills are still far below her ability to express herself in English. She told her story orally, and I wrote it down. After each sentence, I’d read back what I thought she was trying to say. Sometimes she corrected me for misunderstanding her intent. Then, she’d read the new sentence back to me, and then the entire story including the new addition. It was a lot of reading practice, but because they were Riri’s own words, it didn’t feel like work to her. She was checking that my words matched her ideas.

Me: Rocco wakes up. When does he wake up?

Riri: Rocco wakes up in the morning.

Me: (writing Riri’s sentence and then reading): Rocco wakes up in the morning. Is that what you want to say?

Riri: Yes. (Riri then reads the sentence) Rocco wakes up in the morning. 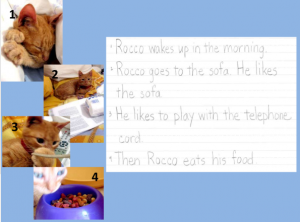 Step Three: Expand on the story

To begin our next session, I brought out the draft of her story, and she read it from start to finish. Then, I cut the sentences apart because the physical separation makes the idea of expansion easier to understand without a lot of explanation. 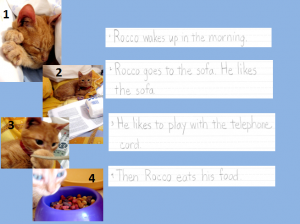 I taped the sentence on a new piece of paper, and asked Riri to think of something to add to her original sentence. We followed the same approach as before, clarifying Riri’s idea, writing them down, and reading it back. In this way we added at least one new sentence for each picture, and Riri got a lot more practice reading. 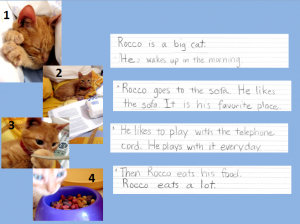 I put the pictures and typed in the text for Riri’s story between classes. I showed her the story in slideshow mode, and–you guessed it!– she read the story to me again. Then, I brought out a digital recorder and recorded her reading her story. Since the recordings are in mp3 files, it’s simply a matter of plugging the recorder into the USB port on my laptop and dragging each file onto the matching page in the story.

I hope you enjoy Riri’s story, and I hope you give this activity a try in your own classes. If you do, I hope you’ll share your experience, and your students’ stories!