Long Ago Lessons in a Japanese High School

Part of the series: Lessons Learned from Students

Back with the ink was barely dry on my MATESOL, I had a group of students from whom I learned many, many lessons. This post is about three of those lessons…

The setting: A once-a-week English class at a high school in Japan, in the mid 1980s.

The characters: Sixty 16-year old boys who had never seen a foreign person “up close and personal” and me, a teacher who still thought she actually knew something about teaching and whose Japanese repertoire consisted of hello, thank you, and I’m lost.

Scene One: Why are you bowing to me? I’m not your leader! 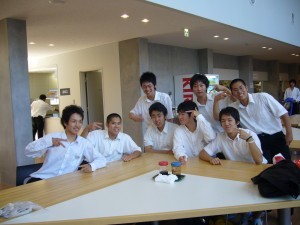 I felt uncomfortable the first time my students stood and bowed to me at the start of class. Because this was English class, I decided that my class ought to be a little island of American culture (meaning, in my mind, no obsequious bowing).

The next week, I entered the classroom and waited in vain for my students to stop talking, face me and make eye contact. I spent most of the next few lessons trying to get the boys to take class seriously. Finally, I reinstated the class-beginning bow, and all was well. As long as they had the nonverbal signal that this was a real class (they bow at the beginning of every class) my students were ready to try whatever I asked of them during class.

Lesson learned: Don’t take away one nonverbal signal unless you replace it with another. If I had started by respecting the structure my students were familiar with, and gradually introduced another way to signal the beginning of class (like becoming quiet and looking at the teacher), I could have most likely replaced the bowing without disruption.

Scene Two: This is English class. Why are you speaking Japanese? 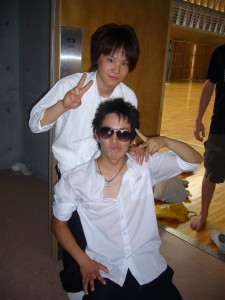 I’m a child of the communicative and natural approaches (MATESOL in the 80s). So, of course, my students did pair work, information gaps, jigsaw activities, and meaningful tasks. But, whenever my students were working in pairs, or in small groups, I heard more Japanese than English. I coaxed, I threatened, I separated, I even deducted points from games. But still, when I gave them an activity, I heard whispered Japanese. What were they saying? Were they totally ignoring me and my instructions? Were they making rude comments about me? It’s easy to become a bit paranoid when people are whispering in a language you don’t understand. Gradually, my Japanese improved enough to understand the gist of these conversations: What the heck does she want us to do? Do you know what we’re supposed to be doing? You ask her. No, you!

Lesson learned: Know enough of your students’ language to understand when they’re lost. Classroom language is largely repetitive, and it doesn’t take long. Regardless of your personal feelings about English only in class, it really, really helps to know what your students are saying. And, if you want your students to do an activity in English, be sure they 1) know the language they’ll need to complete the task and 2) know what they’re supposed to do during the activity 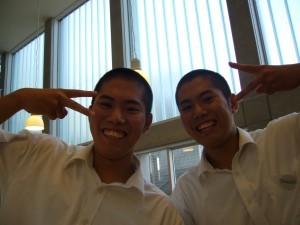 By the end of the year, I had finally figured out how to work within my students’ notions of class structure to create a environment where they were communicating with each other in English. The boys were willing to do what I asked, as long as they understood what it was I wanted them to do. Picture day seemed a perfect opportunity to document our growth as teacher and students.

I was thrilled when my students asked if they could decorate our class chalkboard with English quotes from movies. They had gone beyond my lessons and made a connection with authentic English! Being the mid-80s, my students’ favorite American movie was Beverly Hills Cop, and all of the quotes included variations of f**k. They’d conjugated the verb perfectly, and had even managed to include most parts of speech. There were pictures, too, to support meaning. I was mortified, but everyone else, including the head teacher and photographer, seemed quite impressed with my students’ efforts.

We stood in front of the board for our class picture. The photographer said cheezu and the boys raised their hands. Looking at the pictures in this post, you can imagine the gesture I expected to see–the ubiquitous Japanese peace sign. Unfortunately, my students only used one finger. It was quite the class photo 🙂

Lesson learned: When 16 year old boys as a group ask to do something that constitutes work beyond the requirements of class, get details. Ask follow up questions. Set parameters. And when you still end up with a chalkboard full of profanity and a class photo of cherubs giving the middle finger salute, laugh. A sense of humor really helps.