Most teachers have a short list of foolproof activities they can build a lesson around in a pinch–and this is one of mine.

It’s foolproof because it works for all levels, all ages, and with or without prepared materials. It’s deceptively simple, so beginning students are able to expand their existing language skills and strategies without feeling intimidated. Students control the difficulty, and discover the language they need in the process of completing a task. I’ve done this successfully with both children and engineers (at extreme ends of the language skill spectrum), but will demonstrate it with a class I currently teach of beginning adults. 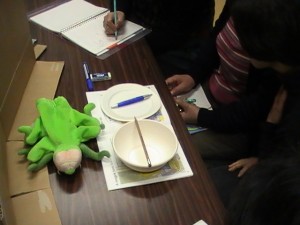 You need an identical set of objects for each pair of students or group. You can include objects you know will challenge your students (for example, pronunciation distinctions between “bag” and “bug” are tough for Japanese). When it’s a spur-of-the-moment lesson—you’ve brought stuff for a different class, you’re subbing for another teacher, the technology gods are not smiling on you or your tools—the materials can be as simple as what students have in their bags or things you have around the classroom, or even paper and pencil.

See how much language your students already know by arranging the objects and asking them to describe them (The pen in on/in/next to/under the book). This is also a great way to cut down on level gaps—you make sure that all students start with the same knowledge. You need a screen of some sort, to create a genuine need to communicate. This can be a cardboard box, an open book, or even simply having students sit facing away from each other. If they can see each others’ objects, the activity becomes communication practice, not communication, and isn’t nearly as valuable.

Give each group an identical set of objects. Place the screen between groups. Group A arranges their objects in any order they like. The only restriction is that they have to be able to tell Group B how to duplicate the arrangement in English. Group A instructs Group B, and Group B asks for repetition and clarification, and checks their understanding. When Group B is satisfied, remove the screen and allow students to compare. 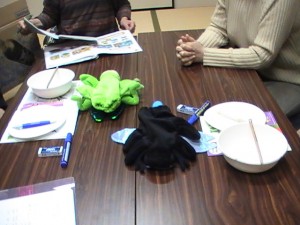 Have students identify where communication broke down, and figure out what would have helped (additional vocabulary, asking for clarification, paraphrasing to check their understanding, etc.). I provide the language they ask for, add it to the board for reference, and let them try the activity again.

While I start students out with a list of basic location words on the board (as we review at the start), I provide additional language as they discover the need. Not only does this help keep the task at my students’ challenge level, but they remember the language better when it fills an immediate need.

I usually stay quiet during the activity itself, so the focus is on communicating and understanding information, not on correction. One of the problems I have with students in Japan is convincing them that it’s okay to make mistakes. So, it’s important for them to experience success with their imperfect English. It’s a confidence builder, and encourages them to take risks in other English activities later. By taking risks they get more (and better) practice, and do improve.

This first video shows my students discovering a need for “upside down” in describing the position of the bug. I let them struggle through to see how they communicate around the missing word. You’ll hear them speaking a fair bit of Japanese as they pool their knowledge, and make sure that a new (very low) student is able to follow along.

They got better at explaining, and at asking for clarification, each time they did the activity. They could see improvement as their arrangements more and more closely mirrored each other. In this second video, you can hear how much more fluent and detailed the descriptions have become.

Students knew they’d succeeded not because I told them they’d done well (which I did) but because they could see that their arrangements matched. They’d successfully communicated information in English, had been able to clarify and ask for clarification, and had been understood. 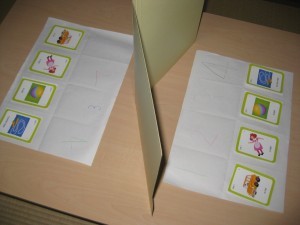 If you’re teaching very young learners (before they get the concept of right and left), you can use numbered squares, divided by a screen. Student 1 places one picture card or object in each square, and tells Student 2 where to place his or her cards. The activity point is to give them a reason they have to communicate, and a task they can succeed at in English, using their current level of language skill and linguistic strategies.

If you’re taking over an existing language class, this is a great way to discover how much they already know, and what strategies they rely on in communicating.

If you need to assess students, listen and take notes. For example, I can tell that my students need additional practice to become comfortable paraphrasing and checking their understanding in English (they switch to Japanese to be extra sure of meaning) and a bit more vocabulary, even though I was thrilled that one of them thought of trying a familiar word (central) to substitute for an unknown expression (in the center of). They got their meaning across, which was the goal.

What about you? Do you have a foolproof lesson? Please share!