I got an email recently about a new iPhone app from Edublogs, which is the platform I use for my class blog. Since today is the day I teach at the community center (no Internet except for my phone) and I had planned to have students review language, it was a good opportunity to try it out. While it isn’t really an app for role plays, that was the use I had in mind for today’s lesson. 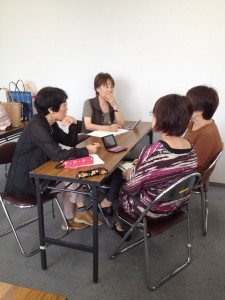 The students’ task was to create and perform a short scene using some of the language we’ve been working on. I would record the performance using my iPhone and upload to the class blog. I’ve recorded projects before but have always had to transfer them to my computer and upload from home. This was the first time my students would have the instant gratification of seeing their videos online right after making them. At least, that was the plan. 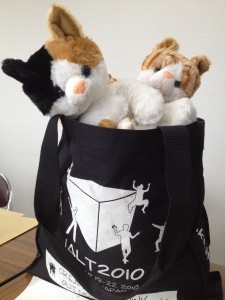 First, students worked together to remember the language we’d covered in class and then worked in groups to create a short scene. I provided some basic supplies if they wanted to make props and provided puppets so that students had an option to keep themselves out of the video. I believe in using technology when it improves on what I’m trying to do in class, and in this case, the addition of video turned practice and presentation into rehearsal and performance. Even though some students are a bit hesitant about being recorded, it makes the project more tangible–people will watch and enjoy their work. An audience provides a reason to speak. Surprisingly, since I’ve started offering the option of hiding behind a puppet, I’ve had much less reticence about appearing on video. Perhaps knowing that they don’t have to be in the video makes it easier to choose to participate? I don’t know, but it’s worth bringing my tote bags of puppets to class just for that result. (If you’re interested in reading more about my attitude toward technology in language teaching, I’ve just published a post on the iTDi blog, along with 5 other interesting posts about this very topic. I’ll be posting a summary about them tomorrow.) 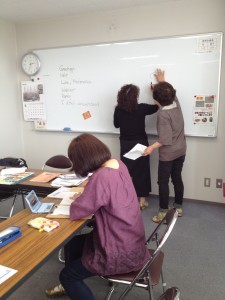 The recording went well, aside from a bit of shaking from the cameraman (me). I was able to create a new post using the app, but ran into trouble trying to upload the videos to our blog. At close to 3 minutes, they were just too big. Again, the easiest way to include the videos was to upload them to YouTube and then embed them in the blog. But, the app does mean that students can create blog posts in class, and without video we should have no trouble publishing from my phone. I can also share posts from my phone, for students who don’t have Internet access at home.

You can see their finished videos on my student blog, My Corner of the World. They’re far from perfect. I set a time limit and only recorded once. The class objective was to use have fun using language for a purpose, not to create a polished performance. Later, students will have an opportunity to return to the scenes and revise and re-record, if desired.

Apps are allowing me to bring all sorts of high tech tools into my low tech classroom. How about you? Have you used mobile apps to integrate technology into your lessons? If so, I hope you’ll share your favorites in comments!

Note: This article by Barbara Hoskins Sakamoto originally appeared on Teaching Village, and is licensed under a Creative Commons, Attribution-Non Commercial, No Derivatives 3.0 License. If you wish to share it you must re-publish it “as is”, and retain any credits, acknowledgements, and hyperlinks within it.