What are these? How are they used? 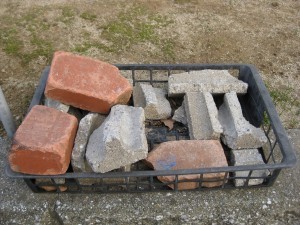 They’re bricks, or more accurately, broken bits of bricks. But, knowing what they’re called doesn’t really help you understand how they’re used.  Taken out of context, the objects have little meaning.

How about now? How are the bricks used? 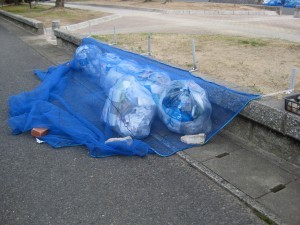 When you see the bricks in context, their purpose is easier to understand. The bricks are used as anchors to hold down a net.

If trash day in your country (or in your part of Japan) doesn’t look like this, you might still feel a bit puzzled. Context is also cultural.

What if I add a story?

In my neighborhood, we put trash in color coded bags—green for burnable trash, blue for plastics, orange for PET bottles and cans, and brown for bottles. We put all of our bags in a central location on the appropriate day before the designated time.

This week, I’m on trash duty. It’s my job to take out a large blue net to cover the trash bags. I have to wake up very early in order to put the net out before anyone brings trash bags. After the trash has been picked up, it’s my job to put away the net and clean up the trash drop off area.

The net keeps crows out of the trash. There are a lot of crows in Japan–giant, monster crows.  These birds think of trash day is their all-you-can-eat buffet. The bricks keep the crows from lifting the net (and also keeps the trash bags from blowing away).

Since it’s my job to clean up after trash day, I never forget to put out the net, or the bricks!

You aren’t likely to be teaching “trash net anchors” as a vocabulary item in your classes. But, I wanted to choose an example that was unfamiliar, so you could understand how your students might feel when trying to learn words without context.

Teachers of young learners naturally include a lot of context in teaching, since most of their students don’t yet read. They teach vocabulary with

You can play with context.

Context is a tool. Once you understand how it works to support meaning, you can play with it.

Introducing an object without context can grab your students’ attention. Were you curious when you saw the bricks alone? Were you hoping I’d add information to complete the picture? You can ask students to predict where they might find a particular object, or imagine how it might be used.

Taking familiar objects out of context creates guessing games. Put a picture card inside an envelope or cover it with a piece of paper and ask students to guess what it is, getting some great Yes/No question and answer practice along the way. Or, put real objects inside a bag and let children touch the bag as they guess.

You can take objects that are familiar in one context, and introduce them in a new context. For example, if my original vocabulary item had been bricks, I probably would have shown a picture of bricks being used in a traditional way (on a building or in a walkway). Then, I might have had students brainstorm additional places and uses they’ve seen for bricks. Perhaps my trash bag anchoring bricks would come up in discussion. If not, I could bring it up. Or, if students have learned the word pen you can expand the context by bringing in pictures of unusual places you could find pens (pens to use underwater or in space).

The more students use words in context (and in different contexts) the more memorable the language becomes, and the closer they get to owning the language (making it a tool for them to use, too).